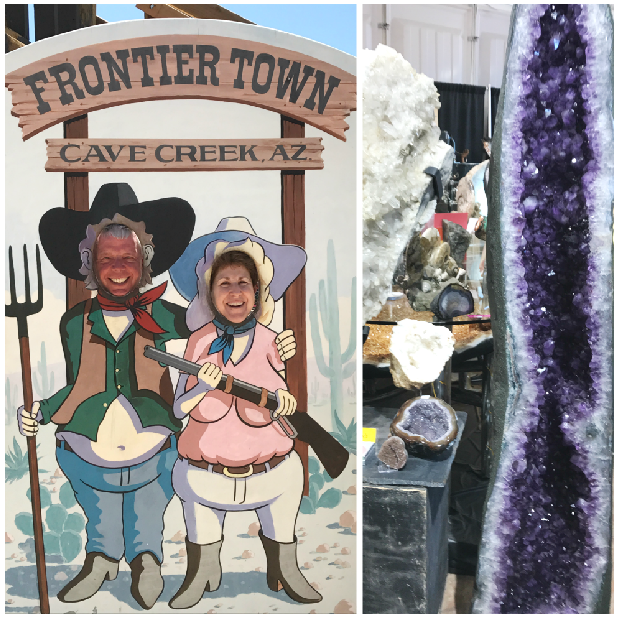 Over a long weekend I flew from LA to meet my parents and older sister in Arizona. We went to visit my Grandpa and Nana who live in the retirement community of Sun City, AZ, which is just outside Phoenix. We planned an afternoon excursion 30 miles north east to a town called Cave Creek (population 5,000). It’s a cute little town with big western charm. It’s also a big artist community so the main street is lined with shops that sell homemade candles, lotions, soaps, jewelry, etc. We walked and shopped until we almost dropped, and decided to make a stop at a bar up the street called The Horny Toad for some prickly pear margaritas. When in Arizona, right?!?! Mainly we needed to cool down from the 100+ degree weather!

On our way back to Sun City we were at a stop sign next to a large tent called Rare Earth Gallery. They had a lot of large stone statues outside and my dad was intrigued, so we decided to pop in. I’m so glad we did! We all had our jaws on the floor the whole time. There were MASSIVE geodes, crystals, fossils (they had an ancient alligator fossil), and even hand blown glass sculptures. Some of the crystals were measured in tons, so when I say MASSIVE, I mean MASSIVE! Not to mention beautiful too! Some were “just” décor pieces, but some stones and petrified wood specimens were made into tables and light fixtures. All the items in the store were curated from different locations all over the world. If you have a few thousand dollars (or maybe $10k+) to drop on a conversation piece for your home, then you need to go visit Rare Earth Gallery in Cave Creek, Arizona! It’s truly one-of-a-kind.